215 OR DIE: An interview with Sonja's Melissa Moore 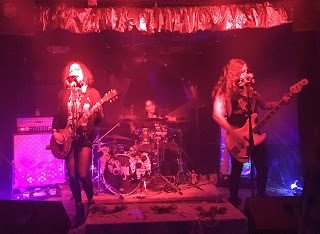 I present to you, a dark transmission with the voice of Sonja, Melissa Moore.

Hell-O Melissa (in my best King Diamond voice). How the hell are YOU?

Not bad. Thank you for realizing the Mercyful Fate reference in my name.

How do you describe the musical experience that is Sonja, in your own words? What can someone expect at a Sonja concert?
Trans femme fronted dark heavy metal that wishes it was death rock. If Lana Del Rey was the singer of Manowar, I think it would be similar. Or maybe if Debbie Harry was in Judas Priest.  We aren't retro or anything whack like that, just classic.

Tell me about the moment you picked up a guitar and realized you wanted to do it for the long haul?
Somehow I saved up like $160 bucks when I was like 11 or 12 and bought my first guitar. Life seemed pretty simple from that point on for me as I was 666% full on locked in to be a rocker for eternity. I was like fuck it, I'm all in for rock n roll and I'm ready to die on the road. I think anyone who met me from that point on knew that I was a child of heavy metal destiny simply by the determined look in my eyes and singular focus.

Here is the same story for a lot of trans people my age who didn't hatch until adulthood: there wasn't the language at that time to describe what I was, even to myself. As a girl in a fucked situation (our society), it was not safe to do anything outside of the gender rules they gave you. Mastery of guitar was a way to soothe the perpetual dysphoric torment...eventually it wasn't enough and my egg cracked despite my resistance, but at least I got good at playing. Now, the true witchery of my riff wielding hands causes great suffering to the patriarchy with each note.

Who are your musical heroes?
Bruce Dickinson - The fact that he is so restless and such a doer of things at the top level. Hendrix - Best guitarist who ever lived and he busted great shapes. Andy LaRoque -  I generally skip guitar solos but I love his. Honorable mention: Uli Jon Roth

What's one heavy metal record that changed your life forever?
Cradle of Filth - The Principle of Evil Made Flesh. Older black metal people will cringe at that, but the riffs you've enjoyed from me would not have existed if not for this release.  Femme 4 OG symphonic BM.

You put out a killer two-song Sonja release last October. What's in store for Sonja in the future?
A cool underground tape label asked to put these recordings out so look for that in the fall as we finalize. We are recording our first full length this year.  It's a culmination of a lot of craft over a long period of time. I just wanna play gigs so bad so once this perfected and done I'll be extremely excited. We've been saying no to live offers so we can put all of our energy into the album but that kills me inside. All hell is about to break loose....

How did Sonja come to be?

I was flying home from an Australian tour with my old band, extremely strung out and hungover from great experiences with the babes from that land...but I had a foreboding realization that there was a hollowness and emptiness in Absu that would lead to its failure. A lack of grit. On that flight I resolved to call Grzesiek Czapla, my musical soulmate, to start our own band. He was being phased in as the live Absu drummer and we were the ones booking the tours and creating whatever good vibes so it seemed only natural to start a band together. I sucked as a vocalist, so we covered Manowar, Priest, Venom, Witchfinder General, and Mercyful Fate songs to get my vocal chops up as well as delve into the songwriting processes of the old masters.

Let me be real here: Sonja has not REALLY started yet. We've played a few shows that I consider to be sort of testing the waters. Our focus has been on creating masterpiece songs. The two songs that we released online weren't even intended to be put out that way...I just saw a ton of traffic mentioning Sonja after I urged people to vote in October 2018, so I hastily threw them up.

What's the creative process like in Sonja, both for the lyrics and music composition?
We write together in the practice room. It can start on any instrument from Ben, G, or Myself and we refine and perfect. Some songs had lyrics first and the music was crafted around them like "Wanting Me Dead" or "Fuck, Then Die." The only reason I'm the vocalist in this band is because I don't trust anyone else to be attuned with the spirits in the same way.

You also launched the Toxic Femme apparel line. Tell me how this idea came to fruition?
Basically, fuck a rainbow is what I say. I prefer death, darkness, and witchcraft to be surrounding me. Transitioning is the most intense thing imaginable and it deserves the proper apparel which reflects this. Black shirts with white print. Living as visibly trans requires infinite times more willpower than anything else I've ever fathomed in life and my partner and I hadn't seen apparel that communicated that so we started making it ourselves. The world does a lot to try to beat down trans/nb people,and the world picked the wrong people to fuck with.

What's your favorite Toxic Femme design, if you had to choose one?


I really like the classic Baphomet pentagram with pronouns. We do shirts that declare pronouns along with different imagery such as pentagrams, goats, etc. I'm the metal one and my partner Mattie is more punk so it's a good balance. We do custom orders with any pronouns for no extra charge. My favorite to personally throw on is the moon phases with the trans symbol in the center. We were selling Toxic Femme stuff at the Sonja merch table and G commented that a lot of it looks like band shirts which is totally the idea. People seems to enjoy ZZ Bottom and Tranzig designs.

Your Toxic Femme apparel helps make trans and LGBT+ people (and allies) more visible, are there any other organizations you recommend looking into to support?I don't have anything specific to recommend but definitely focus on getting help to trans people in countries where their lives are in danger. Do everything you can to destroy religion and its influence, wealth, and power. Anything that hurts republicans helps trans people.

What's your "ace in the hole" underground band that you like to show people who haven't heard it before?
It used to be Brainbombs but now I really dig this new Philly band Control Top.  Neither of those bands are metal.

Philly's got a great metal scene! What are your favorite bands at the moment, locally or otherwise?

Anything you'd like to say to the metal maniacs who read this?


If Udo ever comes back around doing Accept songs again and you don't go, you are a poser.

THANK YOU for going one on one with the GRIM1
Only death is real...

I will definitely stay tuned for the sound and the fury that is sure to come with Sonja's new album. As for Melissa, she has my respect for diving straight into singing Manowar and Judas Priest songs to improve her vocal range, instead of being a lazy schmuck like me and avoiding clean vocals all together. Follow Melissa via Sonja and Toxic Femme at the links below:

Popular posts from this blog

December 16, 2020
War is coming! Pan-Amerikan Native Front is among the fierce bands who lead the charge of in digenous black metal in the Americas. This group is fronted by its enigmatic chief, Kurator of War. Their 2016 full length Tecumseh's War  beats like a war club through the life and conflict of its namesake. Earlier this year, Pan-Amerikan Native Front released the Native Amerikan Black Metal split w ith the Ifernach, which is already sold out of of vinyls their bandcamp . Behold this interview I conducted with Kurator Of War.  Tecumseh's War was inspired by the life of Tecumseh, and it's a blistering musical journey. What was your inspiration for the Native Amerikan Black Metal split, lyrically, thematically and musically? The split album continued to retain a conceptual and storytelling approach, much like Tecumseh's War, and with a similar range of songwriting styles I implemented with the previous album. When Ifernach and I began focusing on themes we naturally landed on the
Post a Comment
Read more

September 24, 2019
Profanatica is widely recognized as the first United States black metal band. Building on the foundation set forth by Venom and Hellhammer, Profanatica has spewed a rambunctious attack on all that is holy since 1990. Their antics on and off stage gained the same notoriety as their hellish music. While their European counterparts posed for photographs with candelabras and swords, Profanatica did photos with blood dripping from their limp dicks. Grainy VHS from the early 90s interviews show them giggling as they rip pages out of a bible and eat them. In many ways, Profanatica is one of the metal bands to become a meme. The recordings of what was to become their first album was destroyed by spiteful band mates before it was ever released in 1990 - read on to find out more about that fateful event. It was nearly two decades later that Profanatica birthed their first full length  Profanatitas De Domanatias in 2007. Rotting Incarnation Of God  is Profanatica's upcoming full length,
Post a Comment
Read more

November 07, 2020
"It's time to die!"  Nearly 40 years since their formation, Sodom proves their metal attack gets nastier with each year. Their upcoming album Genesis XIX is a thoroughly headbanging affair. It marks the return of guitarist Frank Blackfire, who shredded on their landmark albums Persecution Mania (1987) and 89's  Agent Orange, as well as the addition of second guitarist Yorck Segatz, for Sodom's first run as a quartet.  Genesis XIX delivers the heavy artillery one expects from Sodom. It's got the punk influence on it's catchy single "Sodom and Gomorrah", reminiscent of their original, dearly departed drummer Chris Witchhunter (RIP). Songs like "Dehumanized" and "Nicht Meir Mein Land" feature blast beats from their new drummer Toni Merkel, with the latter sinking into an infectiously groovy mid-tempo swagger. Vocalist and bassist Tom Angelripper is the driving force of Sodom. His raspy vocals and distorted bass are the centerpiec
Post a Comment
Read more